Products descriptions visible on the website are translated from polish language using translator and may contain errors and mistakes.
Duralumin flat bars. 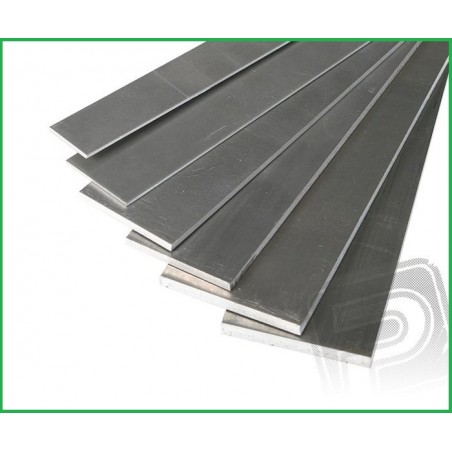 And how to "work" and bend a duralumin?

Duralumin is an aluminum alloy with several percent copper and magnesium and manganese additives, commonly known as dural. Once a "strategic" material used only in selected industries. Currently, it is generally available in the form of sheets, flat bars, profiles of various sections, bars, shafts of various thicknesses, sections and diameters. Dural is very willingly and widely used by modellers building flying, floating and wheeled models ... It is characterized by a favorable design parameter, ie the ratio of strength to specific weight, which is greater than for steel.

Dural can be processed by hand - cutting and trimming shapes. We use hacksaw blades for metal, hair saws for metal, and for complicated shapes we use the "drilling and punching" method.

Finishing treatment . For finishing elements made of duralumin, metal files rubbed with school chalk are used to prevent "clogging" of the file. The use of wood rasps is not recommended! And wherever the highest quality surface is required, we use waterproof sandpaper with various gradations.

The properties of duralumin seem to be well known. The matter becomes more complicated, however, when we have to cut an element from the sheet and then bend or bend it ... We start with a careful inspection of the surface of the sheet to find out how it was rolled - the traces of rolling look like “thin lines”. If the cut piece of sheet metal will be used, for example, to make a landing gear leg or an engine bed of a flying model, then the element should be cut (of course with a finishing allowance) so that the bending lines run across the rolling line. This is not a problem when the landing gear is made of a flat bar. After the element has been cut, all edges should be bevelled with a flat semi-cutter (rubbed with chalk). Holes for fixing the shin
in the hull and on the axles of the wheels we mark and drill only after bending! Now, prepare a pattern on which we will perform the bending or bending operation. Radius should be filed at the bending edges. The old rule still applies: the bending radius must be equal to or greater than the sheet thickness!

First, we need to carry out the supersaturation process, i.e. heating the prepared duralumin element, which, after appropriate bending, will be the chassis or the bed of the model's drive motor. At home, we carry out the supersaturation process using the "match" method. The duralumin element is placed on the plate of the electric cooker or on the gas cooker with the use of a cast iron pan under the pots made of stainless steel. We turn on the electric cooker or light the gas stove burner ... Remember to follow all safety measures! The heat quickly penetrates into the duralumin element. Rub the surface of the heated element with a match stick - initially the match scrapes the surface, which means that the temperature is too low. At the moment when the duralumin "catches" the right temperature, the match moves smoothly and writes in black like a felt-tip pen. Immediately immerse the heated element in cold water. After cooling down, we have about 3 hours to bend ... Then the duralumin will be hard again!

The certainty of the availability of the goods visible on the website.
card_giftcard